Showing posts with the label racial profiling
Show All

Student stopped by met. police for random stop and search

June 16, 2020
The student stopped by met police for random stop and search but appears to look stupid on the part of the police. Location is croydon uk https://www.facebook.com/TEMIDAYOPICTURE/videos/667688637145135/ Subscribe to more videos: https://www.youtube.com/c/PoliceBrutalityWorldwide
Post a Comment
Location: Croydon, UK
Read more 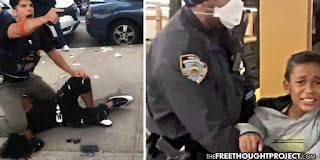 According to a report published on Monday by the New York Civilian Complaint Review Board, two black children were handcuffed by NYPD officers because they were running with sticks while on their way home from school. Police stopped the two boys, ages 8 and 14, frisked them, and then handcuffed them and took them to the police station even though they weren’t doing anything wrong. That was just one example — there are dozens more. The aforementioned incident occurred back in March of 2018 but was not made public until after the case was recognized by the review board. The children were traumatized by the experience, especially the 8-year-old, who always dreamed of being a police officer someday, according to his mother. This case is among more than 100 complaints that the review board has investigated that took place between January 2018 and June 2019, most of which involved male children or teens of color. The review board found that of the 112 complaints that they reviewe
Post a Comment
Location: New York, NY, USA
Read more 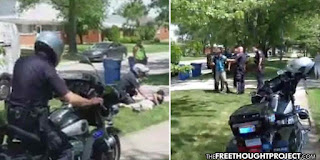 As the Free Thought Project reports on a regular basis, cops enforcing arbitrary laws with no victims, can and will escalate force to the point of killing you for non-compliance. Residents of a quiet Michigan suburb got a shocking dose of this reality Tuesday as they watched an Amazon delivery driver get slammed to the ground and hauled off in handcuffs as he delivered packages to their neighbors. His alleged “crime”? According to residents, he parked on the wrong side of the road. Residents watched in awe from their porches Tuesday afternoon as the driver was tackled to the ground, handcuffed, and then hauled off by cops over the incident. On Wednesday, Warren police  announced  they will be charging the driver with felony charges for resisting arrest and failing to show ID. Apparently, the cop who tackled the 23-year-old Amazon delivery man did so after he refused to show his ID 11 times. “I delivered to her,” the driver says to police as he holds him down. “I can attest t
Post a Comment
Location: Warren, MI, USA
Read more

June 09, 2020
On the night of March 15, 2020, Kevin Penn, 47, owner of Star Spirits & Beverages in Decatur, Al. was robbed. So, he did what society tells him to do — he called 9-1-1. Unfortunately for Mr. Penn, however, like so many calls before his, asking police for help was the worst decision he could’ve made because when cops showed up, they broke his jaw, knocked out several teeth, and arrested him. https://thefreethoughtproject.com/watch-armed-store-owner-stops-robbery-calls-911-cops-show-up-break-his-jaw-arrest-him/ Subscribe to more videos: https://www.youtube.com/c/PoliceBrutalityWorldwide
Post a Comment
Location: Decatur, AL, USA
Read more
More posts