Showing posts with the label Musa Keita
Show All

Musa I of Mali – biography, fact, career, awards, net worth and life story 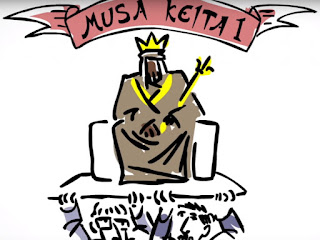 Musa Keita was the 10th Mansa, which interprets as "Sultan" or "Emperor", of the rich West African Mali Empire. On the time of Musa's upward thrust to the throne, the Malian Empire consisted of territory previously belonging to the Ghana Empire in gift-day southern Mauritania and in Melle and the immediate surrounding areas. Musa held many titles, together with Emir of Melle, Lord of the Mines of Wangara, Conqueror of Ghanata, and at the least a dozen others. It's miles stated that Mansa Musa had conquered 24 cities, each with surrounding districts containing villages and estates, for the duration of his reign. Musa Keita turned into noted Mansa Musa in Western manuscripts and literature. His name also appears as Kankou Musa, Kankan Musa, and Kanku Musa. 'Kankou' is a famous Manding girl's name, for that reason Kankou Musa reads 'Musa whose mother became Kankou'. Other options are Mali-Koy Kankan Musa, Gonga Musa, and the Lion of Mali. Li
Post a Comment
Location: Canada
Read more
More posts