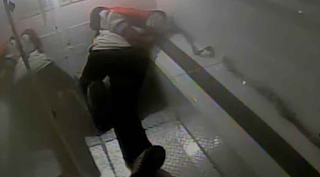 Randy Cox was detained on June 19 for an alleged firearms charge. Moments later, he was paralyzed below the waist, his treatment resembling that of Freddie Gray, who was slain by police on a similar journey. However, Cox's abuse was recorded on camera this time.

Cox was handcuffed and unrestrained in the back of a police vehicle when the cops stomped on the brakes earlier this month. The footage shows Cox flying headlong into the van's holding room and slamming his head against the wall before collapsing to the ground.

Cox was detained after New Haven police responded to a "weapons complaint" call, according to New Haven Police Chief Regina Rush-Kittle. At 8:33 p.m., Cox is put in the back of a police vehicle, as captured by a body camera. About two minutes into the journey, Cox is seen kicking the wall at the rear of the vehicle. After kicking the wall for fifteen seconds, the vehicle comes to an abrupt halt.

According to the footage, Cox becomes airborne as he flies to the front of the vehicle, smacking his head on the wall and presumably breaking his neck.

According to Rush-Kittle, officer Oscar Diaz was attempting to avoid a collision with another vehicle by using an "evasive maneuver." However, the timing of the abrupt halt seems strange, given it occurred immediately after Cox started kicking the van's wall.

Officer Diaz stops after slamming on the brakes in order to check on Cox.

"What, you fell?" Diaz inquired Cox.

Diaz said that he would then call an ambulance for Cox before locking the van's doors and transporting Cox to prison.

Cox continues to inform authorities that he is unable to walk after their return to the detention facility, and they ridicule him for it.

"You're not even trying!" an officer exclaims.

According to the body camera evidence, the cops believe Cox is intoxicated and instead of assisting him, they ask him about drunkenness. The individual is then taken from the vehicle, placed in a wheelchair, and led to a detention cell.

As cops try to remove Cox from the wheelchair, he exclaims, "Oh my goodness, [inaudible] I f**king shattered my neck."

Eventually, an ambulance arrived, and Cox was sent to the hospital for surgery on his fractured neck. He continues to be on a respirator and is paralyzed from the chest down.

"What happened to Mr. Cox was absolutely horrible and inexcusable... "This will not be permitted by the New Haven Police Department," the mayor stated during a Tuesday press conference.

"This is unbelievable. This is dreadful. This is a cruel act. We are superior to this, New Haven. During a news conference on Tuesday, civil rights attorney Benjamin Crump said, "We are better than this, America." He said, "This is a video of Freddie Gray. And the whole world is watching"

The implicated policemen have already been put on administrative leave.