Showing posts with the label Rutherford Jean
Show All 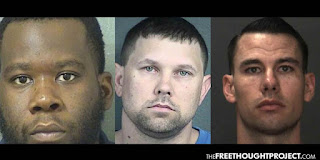 Frequent readers of the Free Thought Project know those police officers throughout the United States are arrested regularly for sex crimes. According to multiple studies, the majority of these crimes are against children. Proving the above point is the fact that cops are still getting arrested frequently for alleged sex crimes against children — despite many of them being in the streets attacking protesters. Over the past few weeks, there has been no shortage of police officers getting caught on  camera savagely abusing peaceful protesters.  While a handful of the perpetrators were actually arrested, the overwhelming majority of offending officers were not. In the background, however, as protest headlines garner most of the attention, police officers are continuing to get arrested for sex abuse against children. In the last week alone, there have been nearly a half dozen cops arrested for sex crimes against children. One of those cops was Collier County deputy Rashaad A. Smi
Post a Comment
Location: United States
Read more
More posts