Showing posts from May, 2022
Show All

#Endsars:How Oyetola wiped the tears of victims of police abuse in Osun 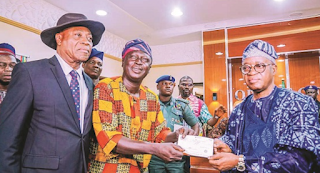 Prior to November 2018, Osun State was seen as a state unable to undertake things that would make it competitive with other states in the nation. In actuality, it was seen as a state on the verge of bankruptcy. Since assuming office in November 2018, Governor Adegboyega Oyetola has drastically altered the narrative. From his ambitious construction of 332 Primary Healthcare Centres, one for each ward, to the reinstatement of full wages and pensions, Oyetola has continued to place Osun on the map of positive states in Nigeria. During the emergence of the Covid-19 epidemic, Oyetola rose to the occasion despite its financial difficulties and without assistance from the Federal Government. In addition, he was the first Nigerian to advocate for the full lockdown of the whole nation if the government wished to wage and win the desired fight against the virus. Before the FG announced the closure of additional states, only Lagos, Ogun, and the Federal Capital Territory (FCT) were under lockdown
Post a Comment
Location: Osun, Nigeria
Read more

'Let Me See Your…' BOOM! Father Killed by Police Officer Before He Could Comply

Since almost a month ago, Jalen Randle's family has demanded the release of the body camera film showing HPD officer Shane Privette murdering Jalen. This week, the footage was eventually revealed, and now Randle's family is seeking justice, citing the video as proof that his murder was completely unwarranted. "At this moment, I am exhausted from sobbing. Tiffany Rachal, Randle's mother, told ABC13, "Now it is my turn to fight and speak up for what is right." According to the authorities, Randle was sought on drug-related felony charges on the day he was murdered. On April 27, police attempted to stop a vehicle in which Randle was a passenger, and when the vehicle stopped, Randle left the vehicle via the passenger side door. Immediately as Randle left the truck, officer Privette shot him in the back of the neck. When he was slain, Randle had made no threatening motion and was just standing there. Last month, when police murdered Randle, they informed his paren
Post a Comment
Location: Houston, TX, USA
Read more

Cops Pursue Unarmed 13-Year-Old Boy, Shoot Him When He Raises His Hands

Another unarmed 13-year-old was shot by Chicago police officers. The boy's hands were up, he posed no danger, and he was only a passenger in a car that was suspected of being stolen. This Monday, the boy's parents filed a lawsuit against the city and the Chicago police department, alleging that CPD's "long sordid history of deploying excessive force" contributed to the shooting of their son. Since he was shot on May 18, the kid known only as A.G. in the complaint has been hospitalised in serious condition. According to the complaint, the bullet struck him in the spine and has left him with "permanent and catastrophic" injuries. A.G. was fleeing the gunman, he was unarmed, and he presented no danger to the officer who shot him or anybody else in the area, according to the complaint. "Multiple witnesses at the scene testified that A.G. obeyed the officers' instruction to raise his hands, and his hands were definitely up when John Doe Officer shot
Post a Comment
Location: Chicago, IL, USA
Read more

Officers will use practically any excuse to escalate force and make an arrest. PBWW channel website has documented police brutality in cases of “contempt of cop,” or harming a cop's ego. The absence of accountability when officers punish without redress frequently encourages violence. Of these policemen, Jacksonville Sheriff's Officer Alejandro Carmona was one who was able to inflict serious injury on an innocent lady and not face consequences. Carmona was part of a group of officers that brutally attacked an innocent lady, fracturing her teeth, and got away with it. Now, this officer is back in the limelight. This time for kidnapping. Carmona was charged with a child sex offence in March after sending nude photographs to an underage kid over Snapchat. An anonymous tip led the Clay County Sheriff's Office to arrest Carmona on March 16. Carmona was promptly freed on bail and returned to kidnapping. He was recently detained again and charged with one crime of internet solicit
Post a Comment
Location: Jacksonville, FL, USA
Read more

Despite being shot, an unarmed man repeatedly obeys the ‘Hands Up' order.

Two police officers of the Lawton Police Department in Oklahoma have been fired and charged with manslaughter after their execution of an unarmed man who repeatedly sought to comply with their commands to put his hands up was filmed on their own body cameras. In December 2021, officers Nathan Michael Ronan and Robert Leslie Hinkle were sent to investigate an allegation of a man allegedly breaking a restraining order. Ronan and Hinkle would fill Quandry Sanders with more than a dozen gunshot wounds only moments after their arrival. Sanders was unarmed and repeatedly had his hands in the air when he was executed by two of Lawton's finest. In response to an allegation that he was in an armed standoff with women and children inside the house, police body camera footage saw Sanders exiting the residence. However, as soon as he was given the opportunity, Sanders left the house. It is unknown if he truly had a gun inside the house, but he was completely disarmed outside. As shown by the v
Post a Comment
Location: Lawton, OK, USA
Read more

Unarmed Grandma Executed by Cop with 30 Rounds as She Flew

The Stockton Police Department implemented a policy in 2019 that "usually forbids firing at fleeing automobiles." According to the department's General Orders, decisions to "fire at moving vehicles must be based on the most compelling grounds." Unarmed grandma fleeing a traffic check seems to be one of those "compelling circumstances." Tracy Gaeta, a 54-year-old grandmother with no criminal record, looked to be suffering from mental illness on February 22 when she rear-ended a police cruiser at a red light and fled the scene. We will never know what prompted Gaeta to collide with the police cruiser that day, or what motivated her to leave since Gaeta was executed soon after the incident started by officer Kyle Ribera. While the reason Gaeta collided with the patrol vehicle that fatal day remains a mystery, the subsequent events are fully obvious due to several video angles. As the films demonstrate, Gaeta struck a police officer who was waiting at a re
Post a Comment
Location: Stockton, CA, USA
Read more
More posts