Showing posts with the label Afeez Amzat
Show All 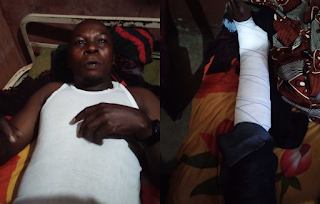 Kazeem Amzat, 48, was hospitalised Wednesday after a police officer in Osun dragged him and his son, Afeez, on a motorcycle in Osogbo. The event occurred at around 9:30 a.m. on Wednesday in the Owo-Eba, Oke-Ijetu neighbourhood of Osogbo, the capital of Osun State. The police officer was one of the state CID officers stationed at the Owo-Eba checkpoint. Amzat, who also sells plank, is now recovering from a bone fracture in his left leg. Additionally, it was said that several furious adolescents in the vicinity descended on the police officer after the event, injuring him. Amzat described his experience in a hospital bed, saying he was riding his motorbike to his farm in Apara village, Atakunmosa East Local Government, with his son. He continued by stating that he instructed his son, who was riding the motorbike, to detour to meet a welder who had been working for him on a building, when a police officer suddenly approached and brandished a pistol at them. Amzat stated, "The cop pul
Post a Comment
Location: Osun, Nigeria
Read more
More posts