Showing posts with the label MinneapolisPD
Show All 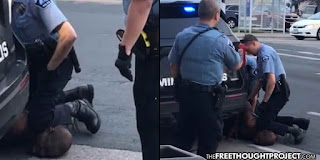 After the death of Eric Garner in 2014 shook the nation, the phrase “I can’t breathe” has become a chilling symbol for violence doled out at the hands of the state. TFTP has reported on multiple instances in which entirely peaceful and often innocent people have muttered those words just before police officers squeeze the last bit of life from their bodies. Tragically, as the video below shows us, this is still happening. https://www.gofundme.com/f/george-floyd-bigfloyd https://www.gofundme.com/f/georgefloyd Subscribe to more videos: https://www.youtube.com/c/PoliceBrutalityWorldwide https://youtu.be/GaF_tsiXC2Q
Post a Comment
Location: Minneapolis, MN, USA
Read more

‘All of Them Sat On This Man’: Cops Gave False Story About Floyd’s Death Despite Testimony from Their Own 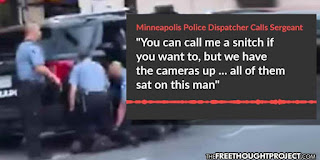 Following the death of George Floyd, officials with the Minneapolis Police Department were evasive about the actions taken by the officers involved with his arrest. In initial statements to the press, the police department only said that Floyd appeared to be suffering from “medical distress” during the arrest and that he was then taken to a nearby hospital where he passed away. Rachel Blevins @RachBlevins Never forget that these are the lies the Minneapolis PD told about George Floyd’s death, and without video evidence, we may have never known the truth... https:// twitter.com/adambelz/statu s/1270040388510846979  … Adam Belz ✔ @adambelz reminder that this is how the Minneapolis Police Department initially reported George Floyd's death 41 4:10 PM - Jun 9, 2020  ·  Washington, DC Twitter Ads info and privacy 20 people are talking about this However, there was no mention of the very likely po
Post a Comment
Location: Minneapolis, MN, USA
Read more

- June 09, 2020
On Sunday, the majority of councils members on the Minneapolis City Council announced their plans to disband the entire police department and replace it with something more community-oriented. The move comes after officers killed George Floyd and were not immediately held accountable and the multiple criminal acts Minneapolis cops have carried out since that day. As the following video below of cops slashing tires shows, cops in Minnesota have no problem giving the public reason after reason to fire them all. https://thefreethoughtproject.com/watch-cops-caught-slashing-the-tires-of-journalists-parked-cars-for-safety/ Subscribe to more videos: https://www.youtube.com/c/PoliceBrutalityWorldwide
Post a Comment
Location: Minneapolis, MN, USA
Read more

- June 08, 2020
On Saturday, several Minneapolis city council members announced that big things were coming in the pipeline that would be revealed on Sunday. Then, on Sunday, nine members of the Minneapolis City Council proclaimed their support for disbanding the Minneapolis Police Department at a rally. Around the same time, Minneapolis cops were proving to the public exactly why they need to be disbanded — by conducting drive-by pepper sprays on entirely peaceful protesters. Subscribe to more videos: https://www.youtube.com/c/PoliceBrutalityWorldwide
Post a Comment
Location: Minneapolis, MN, USA
Read more

- June 04, 2020
After a massive uprising in Minneapolis, Minnesota that subsequently spread to nearly every state in the country, the significant change appears to be on the horizon. Several city council members in Minneapolis are reportedly in talks to disband the Minneapolis Police Department. This would be a revolutionary move to affect positive change and allow the city to start over with a police force designed around public safety instead of predation and extortion. Subscribe to more videos: https://www.youtube.com/c/PoliceBrutalityWorldwide
Post a Comment
Location: Minneapolis, MN, USA
Read more
More posts