Showing posts with the label BLM
Show All 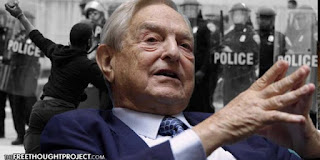 Memos and documents published by  DCLeaks  continue shedding light on billionaire globalist George Soros and his progressive organization, Open Society Foundations (OSF). Due to their poor digital curation, however, the leaks are hard to comb through which is leading to the information slowly trickling out. The latest of the documents reveal the billionaire’s attempt to organize a “national movement” to create a federalized police force. The  document  shows that OSF saw the killings of Mike Brown, Eric Garner, Walter Scott, and Freddie Gray as an opportunity to implement this mission of federal police guidelines. OSF, according to the documents, then held a meeting titled,  “Police Reform: How to Take Advantage of the Crisis of the Moment and Drive Long-Term Institutional Change in Police-Community Practice.” The memo further documents that Soros-financed groups and personalities influenced a Task Force on 21st Century Policing, created by President Obama. Last May, the task
Post a Comment
Location: United States
Read more
More posts