Showing posts with the label Dyma Loving
Show All 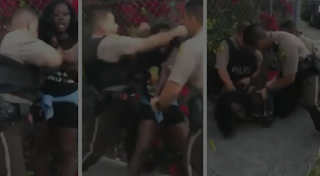 A Florida lady discovered the hard way what it's like to dial 911 in a police state. While some police officers would jump in valiantly to put an end to perilous situations, others seem to thrive on establishing their power and injuring others. Dyma Loving got the latter after she contacted 911 to report being attacked with a dangerous weapon. Fortunately for Loving, her buddy recorded the incident, and as a result of the footage, Loving was cleared and the rogue officer was prosecuted and sentenced this week. Officer Alejandro Giraldo was charged with official misconduct, a felony, for allegedly fabricating reports. Additionally, he was charged with violence in connection with his reaction to the 911 call. "After examining the sworn statements...and all available video footage, we feel there is sufficient evidence to prosecute a breach of Florida's criminal laws," the Miami-Dade State Attorney's Office stated in a statement. Thursday, jurors debated for just mor
Post a Comment
Location: Miami, FL, USA
Read more
More posts