Showing posts with the label Sunrise Thompson
Show All 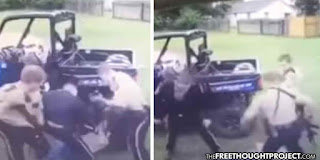 At the point when police appeared, the man associated with the debate, Mark Anthony Smith, 48, was brutally beaten by three agents who all utilized their rifles to dispense genuine injury. The occurrence unfurled in April however its video was just barely discharged. The video purportedly spared Smith from going through decades in jail after it indicated that cops were the aggressors and Smith was an honest casualty. Notwithstanding the charges being dropped against Smith, the clearly degenerate sheriff Greg Sanches is remaining by his officials and legitimizing their close dangerous ambush.  As indicated by Sunrise Thompson, who called police on April 7, the call was made on the grounds that Smith obviously wouldn't move his truck. In a Facebook post, Thompson portrayed what occurred, while considering the sheriff a «lying ass warped duping ass sheriff». I made the 911 call not even once said I was in dread simply needed him to move his truck. Bring the 911 tape and your
Post a Comment
Location: Lufkin, TX, USA
Read more
More posts