Good cop, after she was fired to save bad cop from defeating man with handcuffs

Cariol Horne was fired from the Buffalo Police Department in 2006 after she stopped a fellow officer from choking a handcuffed suspect. Horne has been fighting for 15 years to get her pension. On Tuesday, a state judge vacated an earlier ruling that affirmed her firing. The decision was prompted by the police killing of George Floyd, who was shot and killed by police in 2020. The city of Buffalo is now considering a law that would force officers to intervene if they see another officer using excessive force. It's unclear how many days Horne would need to work to regain her pension, however. "My vindication comes at a 15-year cost, but what has been gained can not be measured," Horne said after the ruling. "I never wanted another police officer to go through what I had gone through to do the right thing," she told the NY Times. The judge ruled that Horne would get her back pay and benefits, and granted her the back pay she had been denied. 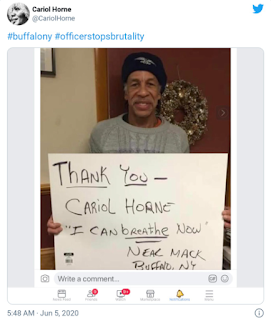 Buffalo, New York, police officer Gregory Kwiatkowski was fired for choking a handcuffed man and then punching a female officer in the face. The female officer had to have her bridge replaced after the punch was so hard that it broke one of her legs. The bad cop, who was choking a man and punching his female co-worker, kept his job. He was already under investigation for punching another officer while he was off-duty at a local bar. In May of 2014, he and two other officers were indicted for civil rights violations against four black teenagers, just days before the statute of limitations was due to expire. One of the teens was also the son of a Buffalo police officer, and he was sentenced to 4 months in prison in 2018 after being convicted in 2018. Unlike Horne, however, Kwiatkowski was forced to retire after he choked another officer at a district station house, but kept his pension. He also punched the female officer who was trying to protect him.