Showing posts with the label US military
Show All 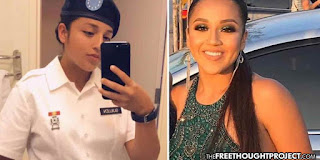 The household of a youth soldier who was killed at the Fort Hood Army Base in Kileen, Texas, where she was stationed, is demanding reply after the girl 's trunk was found dismembered and partially burned in a shallow grave near the military lavatory. Guillen did not file a report at the time because she was afraid of what this manpower might do in retaliation, and she expressed this interest to her household around the time that she disappeared. Vanessa 's sis, Lupe Guillen, said Vanessa was afraid to report what was happening because the military does not take accusations of sexual assault or harassment seriously. She then called on potentiality cadets to reconsider joining the military. Members of the household have also said that they believe a cover-up is taking spot, and that there is a civilization of maltreatment that has been accepted at the station for many decades. According to a 2018 RAND survey, Fort Hood had the highest number of reported sexual assaults an
Post a Comment
Location: United States
Read more
More posts