Showing posts with the label CBC
Show All

A Nursing Student Needed Help But Cops Showed Up Instead and Cuffed, Kicked, Stomped Her 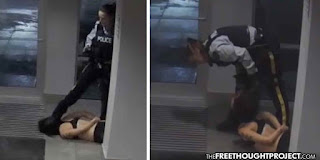 A nursing understudy at the University of British Columbia took in this the most difficult way possible as of late after her sweetheart called the cops to beware of her. The understudy, Mona Wang is currently suing the Royal Canadian Mounted Police official after her sweetheart called crisis administrations to demand a wellbeing check, and she got a boot trampling her face rather. On the evening of January 20, 2020, Wang had carried out no wrongdoing however was encountering mental trouble when her sweetheart called for help. As indicated by an ongoing claim recorded in the interest of the understudy, when police appeared at "help" her, she was semi-cognizant on her washroom floor.  The primary official to discover Wang was Cpl. "Lacey Browning, whose lead as indicated by the claim was" damaging and tedious in the outrageous ″ after the official discovered Wang lying in the washroom. "Cooking continued to attack the offended party by stepping on the offende
Post a Comment
Location: British Columbia, Canada
Read more
More posts