Showing posts with the label Claudia Flores
Show All

Are All the Apples Bad? Police In 20 Largest US Cities Fail To Meet Basic Human Rights Guidelines 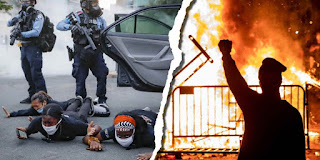 Completely destroying the oft-cited "lone bad apple theory, " according to a new report from the International Human Rights Clinic at the University of Chicago Law School, police departments in 20 of the largest US cities failed to meet the "minimum standards" of basic international human rights guidelines. The report indicated that compared with many other places in the world, police are given far more discretion to use deadly force. The researchers behind the study tried to determine how police policy in the US compares with international human rights standards. As metrics for the standards, the report used the Universal Declaration on Human Rights and the International Covenant on Civil and Political Rights, which the researchers said were "the two fundamental international instruments protecting human rights". The researchers also considered the rules that law enforcement officers in the US claim to follow, which are the UN Code of Conduct for Law
Post a Comment
Location: United States
Read more
More posts