Showing posts with the label Officer Robert Stephens
Show All

While walking across a parking lot, a cop mows down an unarmed man with his cruiser. 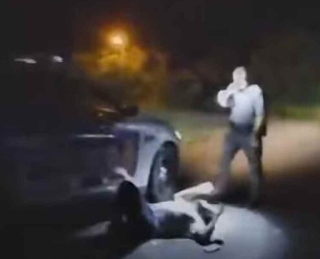 Anthony Gray had committed no wrongdoing on the night he was run over by a police car; he was just exiting a hotel parking lot after a verbal altercation with a staffer. At most, Gray may have received a trespassing notice; instead, cops attempted to murder him in a most heinous way. The taxpayers of Radcliff will now be held liable for the officers’ conduct that night. According to authorities, they got a complaint last September from the Gold Vault Inn reporting that a guy was trespassing on the property. Gray was already out of the premises and on his way when police arrived. It should have ended there, but authorities opted to push the situation unnecessarily to the point of fatal force. As seen by the footage, Gray had already fled the location when police arrived and the first officer on the site began interrogating him. Gray informed the officer that a member of the staff had been unpleasant to him, and therefore he departed. That officer should have released Gray since no crime
Post a Comment
Location: Radcliff, KY, USA
Read more
More posts