Showing posts with the label Dwaine Chapman
Show All 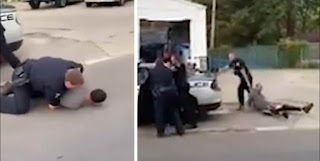 An Ohio cop will start a 60-day unpaid suspension today in an act of swift but limited accountability for  an event  that unfolded last week. Mansfield  law officer  Jordan Moore was seen on video dragging a handcuffed teen around by his hoodie for absolutely no other reason than to  meted out  punishment. While many claim Moore should be facing criminal charges, and he should, the speed at which he was issued a suspension is encouraging.  only too  often, we see similar incidents  during which  cops sit on paid leave for months and even years as their excessive force is “investigated.” On Monday, Mansfield  captain  Keith Porch said Moore was found  to possess  violated departmental policy  referring to  the treatment  of individuals  while in custody and unsatisfactory performance after  an interior  review of the incident. Whether or not a criminal investigation is  happening  is unclear. The incident unfolded on Oct. 12 during the arrest of Dwaine Chapman on charges of menacing,
Post a Comment
Location: Mansfield, OH, USA
Read more
More posts