Showing posts with the label IPOB/ESN
Show All 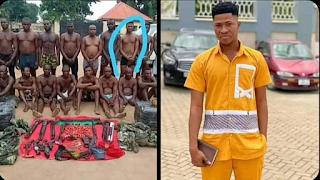 Orlu in Imo State suffered another wave of devastation on Sunday when a hotel, fifteen businesses, and a residential structure were set on fire, claiming two lives. Residents fleeing the area blamed security officers for the devastation, while some said it was the work of unknown gunmen. However, amid the grief and tears, police reportedly displayed people unrelated to the incident. Gideon Dominics, a Facebook user, took to his page to lament the suffering of his cousin, Elvis Okafor, who was detained by police in Okporo-Orlu while attempting to get food for his sick mother and then wrongly displayed as an IPOB/ESN member. “This is my younger cousin Elvis Okafor; have you ever noticed how theatrical Nigeria is? A little child who went to the store to get food for his ailing mother has become a member of IPOB? A kid who returned from church without eating anything now wields a pistol as an ESN member? Chineke tiling. You see the Nigerian enchantment? Is this how innocent individuals are
Post a Comment
Read more
More posts