Showing posts with the label Sanford Rubenstein
Show All 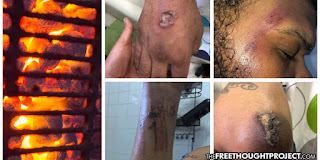 As Bowers spent time with his family, similar to a huge number of different families did that day, casually dressed officials from the 71st Region's enemy of wrongdoing unit chose to threaten him over New York's social removing rules. They were advised to close down the grill and go inside as a result of social removing rules during the COVID-19 pandemic, as per an ongoing case recorded by lawyer Sanford Rubenstein and social equality pioneer Reverend Kevin McCall. As indicated by Arbors' lawyer, Groves tuned in to the cops and was doing precisely what they inquired. Rather than permitting them to get the grill, the cops split down and heightened to savagery.  «They took the food and the coal from the flame broil and they tossed the food and the coals from the barbecue on the ground. » Envision cops going onto your property, thumping over your grill pit, and tossing the entirety of your food onto the ground. Envision you had perpetrated no wrongdoing, hurt nobody,
Post a Comment
Location: Brooklyn, NY, USA
Read more
More posts