Last year, when George Floyd's murder triggered nationwide demonstrations and rioting, Americans watched as the police state bared its fangs. The PBWW website documented many incidents of police brutality against peaceful demonstrators, including policemen in California shooting a grandma in the face with a rubber bullet.

Numerous people were severely harmed by police brutality, with others losing their sight permanently. It was a terrible occupation during which many innocent individuals were victims of police brutality.

Jaleel Stallings, 29, was one of these victims, but unlike his grandmother, he was able to defend himself against an unjustified police assault. However, his act of self-defence resulted in his being charged with attempted murder.

Though other demonstrators engaged in vandalism, rioting, and looting, Stallings was one of the many nonviolent protesters. However, his innocence was no protection against police brutality.

On May 30, officers exploited a curfew enforced by police as a pretext to perpetuate widespread violence. Body camera video released during Stallings' murder trial revealed police officers who seemed delighted about being granted permission to harm whomever they pleased.

Sgt. Andrew Bittell was one of these policemen who were actually ordered to "f**k people up."

That's when he turned to his SWAT squad, who were riding in an unmarked white van, and said, "All right, let's roll down Lake Street." We're simply hitting the first f***ers we see with the 40s," according to body camera video.

The word "40s" refers to 40-millimetre rubber bullets that are "less than deadly."

Around 10 p.m., as the SWAT squad was searching for unsuspecting victims, they came upon a group of individuals outside a gas station and decided to open fire on them without warning.

“Give it to them, boys!” Bittell informed his squad of SWAT police that they were prepared to inflict violence.

This SWAT squad did not open fire on a gathering of protestors. They were the store's owners and their friends, guarding their stuff against looters. One of them was also a VICE News reporter who identified himself as "press" as police unleashed a barrage of "less-than-lethal" bullets on them.

The VICE reporter was then assaulted and beaten by police, who threw him to the ground and pepper-sprayed him in the face. Around an hour later, this same aggressive gang of cops saw Stallings strolling through a parking lot on his way home and chose to open fire on him without warning.

Stallings was struck in the chest by a 40 mm bullet, and since the SWAT team arrived in an unmarked vehicle and did not identify themselves, Stallings, an honourably retired Army veteran, believed he was under assault and had been shot in the chest. He drew his legally possessed small Draco handgun and shot it three times instantly.

“I instantly believed I was being shot with actual bullets and was on the verge of death. Stallings told reporters, "I was under the idea that I was bleeding out."

That is when the SWAT team exited the truck, screaming "guns fired!"

As soon as Stallings discovered they were police, he surrendered and quickly dropped the pistol and fell face down on the pavement, according to body camera video.

Despite the fact that he had surrendered and was immobile, the SWAT squad continued to beat the living daylights out of him, breaking his eye socket in the process. Even though they thrashed him mercilessly, Stallings showed relief when he inquired if any policemen had been injured by his warning shots.

Police weaved an intricate web of deceptions and exploited them to railroad Stallings. Fortunately, unlike the police, the body camera video did not fabricate.

Officer Stetson and Sergeant Bittell allowed their anger and/or fear to take over and pummelling Mr Stallings for almost 30 seconds before trying to arrest him, Judge William Koch wrote. “The video footage contradicts their claim that Mr Stallings resisted arrest in any manner; rather, he submitted to their authority.”

Stallings was acquitted and all fake charges were dropped last week when the truth was revealed. The court determined that Stallings was right in firing at his assailants in self-defence – notwithstanding the fact that they were police.

A SWAT team from the Mesa police branch is going through backlash this week after a video surfaced displaying officers establishing hearth on an unarmed father with his arms up who become surrounded by way of his five kids.

The daddy, Lorenzo Jones had just passed his youngest infant off to the child’s mom before police opened fireplace.

As the video indicates, Jones attempts to inform the officers that he did show as much as the court date and couldn’t have a warrant for failing to appear.

In step with the record, a branch spokeswoman said officers have been told Jones had a gun and have been on “excessive alert.” They declare Jones became now not complying and that they deployed a non-lethal force to get Jones to comply once the kids had been out of his instantaneous region.

But, the video suggests that isn't true in any respect and they opened fire on Jones with the toddler at once behind him.

An infant became at once behind Jones while police opened fire whilst a toddler stood proper subsequent to him.
at July 21, 2020 No comments: 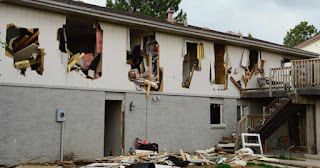 They can now obviously totally crush your home and they won't need to pay for it. This was disregarding the way that the family had no association with the robbery, never permitted the hoodlum in their home, and violated no law before police devastating their home. In the wake of getting this news in October, the family held out trust in their odds in the Incomparable Court. As Reason brings up, this is regardless of the way that the Takings Provision of the fifth Change should shield residents from having their property taken or pulverized by the legislature without being fairly made up for that misfortune.

The Lech family's assets were totally pulverized, left shredded after the Specialized squad demonstrated no worry for the home nor its things. Cops even went similarly as driving a defensively covered vehicle through the entryways, hurled streak blast projectiles inside, and exploded explosives in the dividers of the property. At first, the Lech family was offered $ 5000 in lodging help and protection deductible pay, a long way from what it would take to just flatten the home, not to mention modify it. Leo Lech sued the city, yet the court administered what befell the home didn't add up to prominent space and was basically a consequence of a police matter.

In this way, the city was under no commitment to censure the home nor remake it. As it were, separated from the $ 5000, Lech was getting nothing else. In 2017, in the wake of being white offer the $ 5000, Lech HAD this to state. On the off chance that you take private property for the open great, you need to pay the proprietor just remuneration.

Lech bid the choice to a higher court however in October was denied, once more. Tragically, it wasn't just Leo who was influenced by this administration endorse demolition of private property. Leo Lech was leasing the decimated home to his child John, his better half, and their child. A long way from being an inhabitant in a rental home, when police pulverized the entirety of John's assets alongside his residence, he says he had to live with his folks, secure another position, and power his child to go to another school.

The mayhem which resulted from the Smack scuffle which incorporated an expected 50 officials, really caused the family a colossal measure of inconvenience the family says. "Property rights are the establishment of our privileges, " said IJ President and General Guidance. "The court's decision that administration authorities can intentionally devastate somebody's home without owing a dime in remuneration isn't simply unacceptable. »We don't realize whether to arrange it as the impacts of a Police State or Legal Oppression, however one man's mission to get his home reconstructed by the very police division which totally pulverized it with projectiles, explosives, gas canisters, battering rams, and a reinforced faculty bearer, finished tragically.

In the place where there is the free, the cops would now be able to devastate your home totally and you'll be left to get the pieces .
at July 01, 2020 No comments: