Showing posts with the label Joe Biden
Show All

China is laughing at us 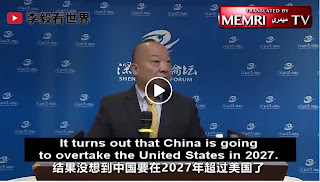 Check the link:  https://www.facebook.com/shouseinthehouse/videos/401711104212518/ Lessons for the United States: 1.) Our propaganda made us look weak to our enemies by broadcasting frailty through over-inflated COVID numbers. 2.) Joe Biden will hand our country over to these communists and they couldn't be happier about it.
Post a Comment
Read more

The last time the American people were allowed  to ascertain  quite  two candidates for president on television was in 1992 when Ross Perot was allowed on stage with Democrat  Clinton  and incumbent Republican President George H.W. Bush. He received  quite  19 million votes as a  result of  being allowed  thereon  stage with Bush and Clinton. Perot  aroused  with about 19% of the  choice  an election that Clinton won by 6 points over Bush. Naturally,  the thought  of  a 3rd  party stealing votes from  one among  the main  parties  may be a  threat to the establishment. In 1987, Democrats and Republicans unanimously agreed  to make  the Commission on Presidential Debates which  may be a  nonprofit corporation established with bipartisan support. The CPD's formation was directly recommended by the bipartisan National Commission on Elections  to show  "Over the sponsorship of presidential debates to  the 2  major parties." The CPD was chaired by heads of the Democratic and
Post a Comment
Location: United States
Read more

In the Midst of a Police Brutality Epidemic, Tone Deaf Dems Nominate Queen of Police State for VP

In reality no matter who wins, the police state grows, wars continue, and your rights are diminished. Nothing highlights this scenario quite like the Democratic nomination of Kamala Harris - whose made her career cheer leading the police state - in the middle of a police brutality epidemic. In short, Harris' entire political career can be summed up in five simple words: Kamala Harris is a cop. Unless you have been under a rock for the last three months, you have probably noticed the nightly clashes across the country between protesters and police. The fact that they are peaceful has been no deterrent from more police brutality. As Americans take to the street to protest police brutality that unfolds across the country on a daily basis, they are being met with even more of it. One would think that the Democratic party would see this and seek to nominate someone who has a track record of fighting for civil rights and not the police state. As Harris' nomination for Vice President
Post a Comment
Read more
More posts