Showing posts with the label Alameda Police Department
Show All

Half-Dozen Cops Attack, Arrest Innocent Man, Accusing Him of ‘Dancing in the Street’ 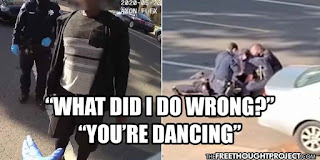 Over the weekend, dozens of protesters gathered in front of the Alameda Police Department — and danced. The protesters were honoring an innocent man who was seen on video being attacked by multiple police officers because he was “dancing in the street,” according to police. You cannot make this stuff up. Mali Watkins, a 44-year-old martial artist, works out in the mornings and quite literally dances along the street. Despite the frequent and entirely harmless nature of his dancing, however, police claim someone “reported” him for dancing. The resultant interaction is infuriating. “What did I do wrong?” Watkins asks the cops who start to close in on him, preparing their assault. “You’re dancing in the street,” one cop says as if this is a reason to go after anyone. “I do this every day… please let me go,” said Mali Watkins, a 44-year-old martial artist. “I was just dancing.” The incident unfolded on May 23rd, just two days before George Floyd was murdered by Minneapolis p
Post a Comment
Location: Alameda, CA, USA
Read more
More posts