Showing posts with the label Kenta Settles
Show All 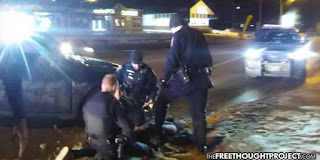 Kenta Settles, a 28-year-old father of three, who is diagnosed with bipolar disorder, schizophrenia, PTSD, and ADHD, had committed no crime earlier this year when he was approached and subsequently assaulted and arrested by several officers with the Garfield Heights Police Department. Because prosecutors chose to never watch the body camera footage to find out what actually happened, Settles spent five months of his life locked in a cage on trumped-up charges brought against him for doing nothing but defending himself from a brutal attack. Settles, represented by Jeremy Tor, has since filed a lawsuit against the City of Garfield Heights and the Garfield Heights Police Department alleging false arrest, violation of Constitutional rights, and excessive force for the stop which took place on January 23. Settles’ nightmare began on that January night as he tried to fill his prescriptions for his mental illnesses at a CVS pharmacy. Because he has no car and the store was closed,
Post a Comment
Location: Garfield Heights, OH, USA
Read more
More posts