Cops Handcuff Man, Beat Him for 6 Minutes for Walking on Wrong Side of the Road 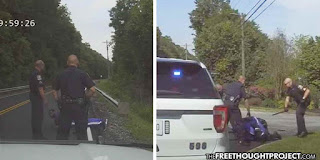 The Hamilton Province Head prosecutor's Office in Tennessee has discharged upsetting video film which shows numerous cops beating a bound man with twirly doos in the wake of halting him for strolling on an inappropriate roadside. Rather than considering these officials responsible for their activities, Sheriff Jim Hammond has guarded their conduct and propelled an assault on the province's head prosecutor, General Neal Pinkston, for demonstrating the recording to the open. "Adequately, what General Pinkston has decided to do is prosecute my representatives in the court of popular conclusion before realities being introduced in a courtroom, " Hammond said. The "realities" that Hammond alluded to in his announcement are the declarations of the officials included.  In a long articulation, the Sheriff called the capture "legal" and recommended that video proof like this ought not to be appeared to people in general in its crude structure without
Post a Comment
Location: Chattanooga, TN, USA
Read more
More posts