SARS, the once infamous police unit now known as the Rapid Response Squad, and its commander, Ogundola, are terrorising residents of the Ekiti region, according to reliable sources. 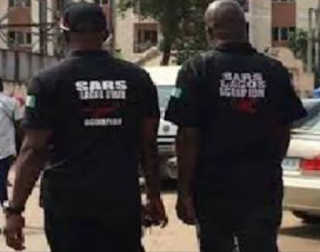 CSP Marcus Ogundola, head of the Ekiti State Police Command's Rapid Response Squad (RRS) unit, and unit operators have been charged with illegal executions, arrests, conversion of suspects' property to personal use, and demand of "outrageous bond amounts in return for people's release."

According to SaharaReporters, Ogundola was the leader of the infamous Special Anti-Robbery Squad (SARS) of the Nigeria Police Force until it was abolished last year after the #EndSARS demonstrations.

SARS was infamous for its violence, extrajudicial executions, and violations of human rights.

On October 11, 2020, Mohammed Adamu, the former Inspector General of Police, announced the disbandment of the police unit in response to widespread outrage against the police unit's crimes.

According to people interviewed by SaharaReporters, the present RRS team is comprised up of former SARS agents.

"They are making a killing in police uniforms by extorting Ekiti State youths in the pretext of pursuing 'Yahoo lads' (Internet fraudsters). CSP Marcus Ogundola, the OC RRS, drives one of the newest Mercedes in town, a GLK to be exact," a resident informed SaharaReporters.

"He made headlines earlier this year during the deadly Omuo-Ekiti bye-election. He was riding in the same car as the criminals that murdered a lady and three others.

"He is an employee of Governor Kayode Fayemi, not of the Nigerian Police Force. He was the former Ekiti State OC SARS prior to the #EndSARS protest. That SARS unit was not abolished in Ekiti since it is comprised of the same individuals who currently compose the new RRS.

"When he was the OC SARS, he had Ogindan, nicknamed White Lion, as his second in command; Deji, aka DJ SARS; One Iku Raymond, Omo Ode; and a policewoman, Catherine as Iya Eji, Chief and Omo Oba. All of these identities and designations were given to his men when SARS was still operational, but guess what? They are now all employed by him in the RRS unit.

"Even the Commissioner of Police is afraid to warn him since he is a close confidant of Fayemi. The same group of men who were infected with SARS are still infected with RRS.

"The commissioner has no authority over him since he escorted him to Fayemi during his first arrival in Ekiti earlier this year. The RRS office has been relocated from police headquarters to the Fountain hotel on Iyin Road just to allow Marcus Ogundola to operate as he pleases."

Another resident, in an interview with SaharaReporters, accused the RRS agents of assault, torture, and ill-treatment.

"Today in Ado, fear of RRS is the precursor of wisdom," the insider said.

According to reports, the deceased, who was assigned to Odo Ado Police Station, died on the scene.

"He returned home to eat; his wife has a business in the polytechnic town near Aba Ebira. Along the road, near the silo, there is this horrible area. Thus, the dead came to his wife's store to dine; he arrived on a motorbike borrowed from one of his buddies. He was employed in Odo Ado, a town not far from here.

"The RRS operatives were pursuing a Benz in two Hilux trucks. I'm not sure where they were pursuing the men from. As they were about to pass the Benz, the dead, widely known as Baba Ada, approached from the other direction and was struck by one of the cars. He passed very instantly," a source informed SaharaReporters.

"That is not accurate, and if individuals have proof that RRS agents have been pursuing them unlawfully, they should contact us, come forward, and inform us that they are innocent and RRS is pursuing them," he said.

"What we do know is that RRS agents are on the lookout for cults and other dangerous individuals in the community, and they conduct operations in response to distress calls. They do not just conduct operations, as was the case at Ikole that day. All I know is that criminal elements will be opposed to the squad's existence. Our hotlines are available to anybody who has an accusation against them. They should inform us rather than using social media to make any complaint."