Showing posts with the label Livingston Jeffers
Show All

Innocent Elderly Couple Attacked, Beaten By Cops As They Walked from Hospital 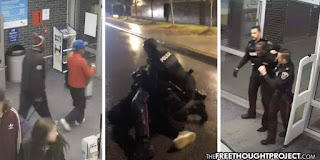 The 92-year-elderly person was knocked off her feet and hit her head on a fire hydrant as the criminal who pushed her continued strolling. Days after the fact, 31-year-old Rashid Brimmage was gotten and captured. His casualty was powerless, guiltless, and never really incite this sequential criminal. Like the 92-year-elderly person pushed by Brimmage in the video above, Livingston and Pamelia Jeffers were both honest, strolling down the road, and hurting nobody when they were both viciously assaulted along these lines. In 2018, Livingston brought his better half, Pamelia Jeffers, to the medical clinic since she wasn't feeling acceptable, the grumbling of a sleeping disorder. Subsequent to investing some energy in the clinic, as indicated by their lawyer, they told the specialist that Pamelia felt better, and inquired as to whether they could restore the following day to catch up. They gathered up Pamelia's bag and afterward exited the entryway. As Worldwi
Post a Comment
Location: Canada
Read more
More posts