Showing posts with the label David Stevenson
Show All

Cops Ordered to Turn Off Body Cams, Illegally Raid Journalist Who Embarrassed Them, And They Obeyed 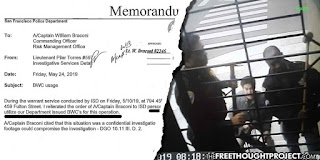 Independent writer Bryan Carmody succumbed to the police state in California a year ago as different San Francisco cops with sledge mallets and weapons started separating his entryway with an end goal to discover his hotspot for a spilled police report. The whole attack was illicit as it so happens, and now, we have discovered that requests originated from the top educating officials to shroud the activities of the unlawful strike by not wearing body cameras. The Correspondents Board of trustees, which was made in 1970 to battle the illicit demonstration Carmody was struck over, presented an open records demand and acquired a notice with the subject "BWC use" as to the unlawful strike on the writer. "The way that officials were told not to utilize their bodycams during an illicit strike of a columnist's house is profoundly disturbing" the city of San Francisco reported they will be paying $ 369, 000 to settle asserts over its police assault on Carmody's ho
Post a Comment
Location: United States
Read more
More posts