Showing posts with the label handguns
Show All

This is the Problem: Police Chief Fired for Supporting Rights of Armed Citizens to Protect Property 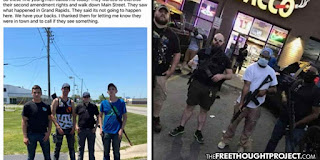 Over the last two weeks, anger in the US toward the establishment spilled over into the streets and while much of that anger was devoted toward government property and law enforcement, another unfortunate reality unfolded shortly after. Opportunists would exploit the peaceful protests for personal gain and loot and destroy private property. Looting and rioting have leveled dozens of small businesses and mom and pop shops have seen their life’s work — which was already struggling from the lockdown — burn to the ground. During the destruction, however, many folks refused to lay down and let the looting crush their part of the American dream. Armed to teeth with semi-automatic assault rifles and handguns, multiple gun owners — both black and white — have reportedly been coming together to protect their private business from looters. As cops focused on arresting and  pepper-spraying journalists,  thieves and vandals were roaming free, and emptying the shelves of mom and pop shop
Post a Comment
Location: Lowell, MI 49331, USA
Read more
More posts