Showing posts with the label Jonathan Mattingly
Show All

Cop Who Killed Innocent EMT in Her Bed, Accused of Picking Up Drunk Women On-Duty, Raping Them 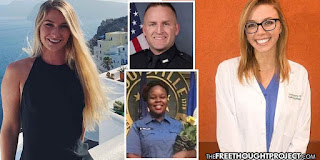 Before the tragic murder of George Floyd by police, cops in Louisville, KY broke into an innocent couple’s home and murdered accomplished EMT,  Breonna Taylor  as she slept in her bed. Instead of charging the officers who killed Breonna, cops arrested her boyfriend for trying to prevent her murder. Now, like the cops who killed Breonna enjoy their paid vacations, the world is learning about their alleged criminal history. After they broke into her home and killed Breonna Taylor, officer Brett Hankison, and two other Louisville officers, Sgt. Jonathan Mattingly and Officer Myles Cosgrove were given paid vacations, not criminal charges. However, the Louisville Metro Police department is finally giving Officer Hankison some attention but not for his role in murdering Breonna Taylor. This attention comes in the form of two women accusing this officer of sexual assault and rape. The department has since reached out to the women so the department’s Public Integrity Unit “can initi
Post a Comment
Location: Louisville, KY, USA
Read more
More posts