Showing posts with the label Crime
Show All

As Cops in Atlanta Refuse to Do Their Jobs, Crime Plummets Anyway, Chaos Does NOT Ensue 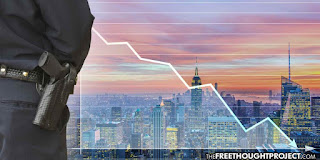 Wrongdoing dropped drastically. Before Atlanta officials executing Rayshard Streams in a bungled DUI stop, wrongdoing started diving. Significantly after the concise distress from fights because of Creeks, wrongdoing was still on the decrease. In spite of the fact that numerous officials from the APD phoned in debilitated after the cop who slaughtered Creeks was charged, records show they were declining to carry out their responsibilities a long time before this.  As indicated by a searing report from WSB-television, preceding the police executing Streams and pitching an aggregate temper fit, traffic stops were at that point down to walloping 80 percent. At the point when cops aren't coercing individuals for harmless wrongdoings like window color, tag lights, safety belts, and other discretionary "offenses, " there is no compelling reason to "defund police" since this will do that for them. The association agent who addressed WSB-television said the official
Post a Comment
Location: Atlanta, GA, USA
Read more
More posts