Showing posts with the label Taylor Yarder
Show All 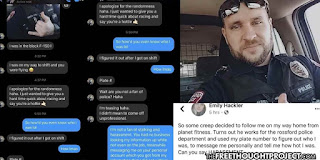 Glenn Goss Jr. is the son of the former chief of police for the Rossford Police Department in Ohio. He is also a police officer. Having his daddy as the man in charge apparently taught him that he could get away with abusing the system to stalk women, and so far, he’s right. Goss admitted to the crime — via Facebook messenger — to his victim, and he’s yet to be arrested or fired. Goss Jr. is the son of Glenn Goss Sr., the former Rossford Police Chief who stepped down in 2018 and who said stepping down was “directly related to my son working here.” Did he know his son was a potential stalker and didn’t want to be in charge when this blew up? Possibly. Though his dad is no longer the chief, according to the department’s roster, he is still an officer. Monday night, Emily Hackler posted screenshots of her exchange with Goss which is nothing short of creepy. She explained that as she was leaving the gym, Goss followed her, then used his access to the police database to find her
Post a Comment
Location: Rossford, OH, USA
Read more
More posts