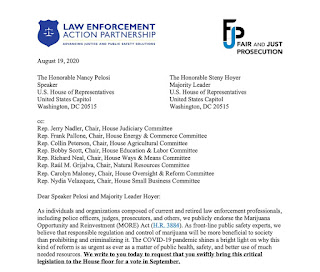 The organization is formerly Against Prohibition, now Action Partnership, the National Black Police Association, and Fair and Just Prosecution have signed onto a revolutionary letter to Congress urging the to legalize marijuana and expunge all past convictions marijuana.In addition to the three major groups signing on to the letter, dozens of current and former prosecutors, judges, and .I'm proud these officials in saying to right the wrongs of the failed war on drugs.We remain focused on combating violent crime, work we've done clearing cannabis records is opening doors for thousands and strengthening our communities.The letter went out last month and is addressed to Speaker Nancy Pelosi and House Steny Hoyer.It calls on House lawmakers to "Swiftly bring" the bill, dubbed the Marijuana Opportunity Reinvestment and Expungement Act, to for a vote this month.The group accurately portrays created by the war on marijuana it degrades trust in police.A significant driver of public distrust in is our low-level marijuana arrests.If marijuana had never been criminalized, Americans would greet us with warmth and cooperation fear and malice.When community members refuse to us, fail to present evidence, to report , our jobs become difficult.Legalizing marijuana will help alleviate this tension us to our shared priorities: responding to emergencies and curbing serious crime.The resources enforce marijuana law violations shifted and more effectively tackle serious and violent crimes.Even as more states legalize marijuana, police made 663,000 marijuana arrests - 92% of them for possession - last year alone.Homicide and sex crimes units struggle evidence examined timely manner.By legalizing marijuana at the federal level, send a message country about our real priorities.Our allegiance lies with crime survivors and would-be victims, not with marijuana prohibition.By serious crime and creating safe neighborhoods - arresting people for a drug most Americans think should be legal - be solve more crimes and earn back the trust of our communities.This conversation is long overdue and it change now war on drugs fosters a violent and criminal society.It should go further and move to decriminalize all substances, not just marijuana.It is estimated that constitutes 86% of the federal prison population.The research cited letter also points this fact out.If you honestly believe that black lives matter, your duty to an end to the .Ending the would have profound effects on police interactions in black communities.No longer would cops be launch fishing expeditions in to catch black people with a substance deemed illegal by the state.What's more, letter points out, decrease crime by eliminating the monopoly on drug sales held by organized criminal gangs.Instead, the state creates crime by pushing the sale and control substances into the illegal black markets - usually monopolized by gang members in poor communities.Criminalizing marijuana has been a boon to the illegal market where there regulations, product testing, etc.Resourceful teenagers usually have trouble accessing marijuana when illegal.Legalizing marijuana shrinks of the market available to teens, which simultaneously reduces their exposure to a criminal activity .A profitable underground market supports the high demand for marijuana, it did during the prohibition of alcohol 1920s and '30s. Calling marijuana a "Controlled" substance is illusory; where illegal, no control.Over time, marijuana legalization will drive out the underground market, alcohol bootleggers disappeared after repealing alcohol prohibition.The underground market still flourishes because marijuana is legal in some places and not others.The most impactful taking marijuana profits criminal organizations and reduce youth access are marijuana similarly to how we regulate alcohol and cigarettes.The illegality of drug possession and use is what keeps the low-level users and dealers in and out of the court systems, and most people are poor black men.Black people are more likely to receive a harsher punishment for drug crime as a .The War on Drugs takes good people and turns them into criminals every single minute single day.The system up in such that it fans the flames of violent crime by essentially building a factory that violent criminals.As stated by the experts in their letter, when drugs are legalized, gang violence drops - drastically.Not only does it have effect on the localized gangs in America, but the legalization is crippling to the violent foreign drug cartels too.We will see more senseless killings and more innocent lives stripped of opportunity by getting entangled system.
at September 07, 2020 No comments: