Showing posts with the label Derek Chauvin
Show All

Chauvin was just the eighth cop convicted of murder since 2005, thanks to a system that encourages killer cops.

Officer Derek Chauvin was convicted on all three charges against him in the killing of George Floyd. Since 2005, American cops have killed over 15,000 citizens while on duty. Of the 1,127 people killed by police in 2020, only 277 of them were suspected of a violent offense. The majority of police killings involve calls in which there was no crime or the suspect was only suspected of non-violent offenses. The cops who killed Elijah McClain, Andrew Finch, Kameron Prescott, Daniel Shaver, Charles Roundtree Jr., Stephon Clark, and countless other completely innocent individuals — all got away with it. This is not okay. The verdict is a major victory for police accountability activists and people were literally crying with joy in the streets of Minneapolis. It's just one battle in a war Americans have been losing for decades. The fight for justice will continue to be a long, long way from a victory for justice for all Americans and police accountability is a long way to go, as this verd
Post a Comment
Location: United States
Read more 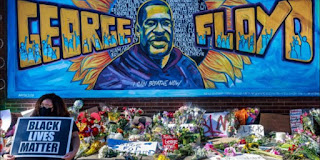 George Floyd, who died after being choked through Minneapolis police officer Derek Chauvin remaining Monday, succumbed to asphyxiation as a result of Chauvin's movements, an unbiased autopsy ordered by means of his family has shown. "Sustained pressure on the right facet of Mr. Floyd's carotid artery impeded blood glide to the brain, and weight on his lower back impeded his ability to breathe," an attorney for Floyd's own family stated in a statement on Monday, after the post-mortem report changed into launched. "The impartial examiners located that weight at the returned, handcuffs and positioning were contributory elements because they impaired the capability of Mr. Floyd's diaphragm to characteristic," he endured. BREAKING: #GeorgeFloyd - independent autopsy finished through Dr. Michael Baden and Dr. Allecia Wilson concludes Floyd died of "Asphyxia because of compression of the neck" and no underlying medical conditions. The fi
Post a Comment
Location: Minneapolis, MN, USA
Read more

Officers from the Allentown police branch are underneath investigation this week after a video was once posted to Twitter displaying two police officers keep down a man, with his arms in the back of his back, whilst any other knelt on his neck - simply like former officer Derek Chauvin did to George Floyd earlier than killing him. According to police, the whole incident started due to the fact a man used to be performing ordinary outdoor in a hospital. "The found erratic conduct resulted in the officers and sanatorium team of workers interacting with the individual. The character started out to yell, scream, and spit at the officers and clinic staff. As the officers tried to restrain the individual, all events fell to the ground. The person persevered to be non-compliant which required officers to restrain the man or woman and the clinic utilized a spit shield. The male in query was once escorted into the health facility for treatment. The male was once dealt with and later re
Post a Comment
Location: Allentown, PA, USA
Read more
More posts