Showing posts with the label Babaji Sunday
Show All 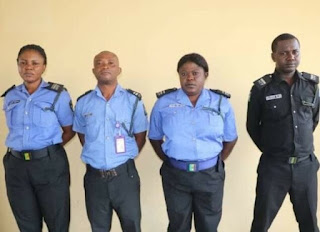 Four police officers in Abuja, the Federal Capital Territory (FCT), have been arrested on the instructions of Babaji Sunday, the FCT's Commissioner of Police (CP), for suspected extortion. ASP Josephine Adeh, the Police Public Relations Officer (PPRO) in the Federal Capital Territory (FCT), said in an Abuja statement on Wednesday that the order followed a viral extortion video circulating on social media in which officers on traffic duty along with Area 11, Abuja intercepted and extorted money from an unidentified man. Adeh said that the cops had been brought into custody for questioning in order to ascertain the circumstances surrounding the incident. "The Police would like to invite anybody who knows how to contact the young guy in the video to provide the Command with his contact information or to transmit an invitation to the Command's Public Relations Office. "The CP expressed profound surprise at the news and termed the officers' behaviour as discreditable,
Post a Comment
Location: Abuja, Nigeria
Read more
More posts