Showing posts with the label Kill
Show All

MSM Finally Admits US Cops Kill, Injure, and Cage More People Than Any Other Country on Earth 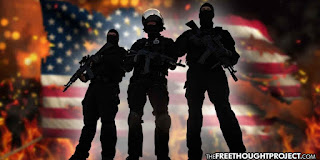 It took two solid weeks of protests, millions of Americans shouting in the streets, riots, looting, and multiple tragic deaths for the establishment media to finally admit that the United States has the most violent and deadly law enforcement system on the planet. Though they are extremely late to the game, the fact that CNN — whose “reporting”  has been questionable at best  — is admitting this fact, is a telling sign of just how bad things have become. American police shoot, kill and imprison more people than other developed countries. Here’s the data This is the title of the CNN  piece,  unlike any other, we’ve seen before. And it’s accurate. The article brings up numbers from 2016 and compares them to other countries. The United States is magnitudes deadlier than the other countries to which it is compared. A  media review  by the Bureau of Justice Statistics (BJS) found a total of 1,348 potential arrest-related deaths in the ten months from June 2015 through March 2016 —
Post a Comment
Location: United States
Read more
More posts