Showing posts with the label L. Chris Stewart
Show All

Cops Wake Up Sleeping Father in Wendy’s, Shoot Him in The Back, Killing Him 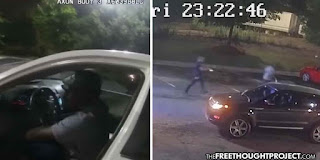 One would think that with the  recently heightened tensions  between police and the citizens, that police would attempt to tone down their escalation tactics. Sadly, however, as the tragic case out of Atlanta illustrates, one would be wrong. Another black man was killed this weekend after he fell asleep in the drive-thru of a Wendy’s restaurant. The death of Rayshard Brooks, a 27-year-old father from Atlanta has already caused a massive backlash in the city. Amid immediate protests sparked over the weekend, Atlanta Police Chief Erika Shields resigned her position. The officer, identified as Garrett Rolfe, who shot Brooks in the back twice as he ran away has also been fired. Another officer involved in the encounter, Devin Brosnan, has been placed on administrative duty. “There is a clear distinction between what you can do and what you should do,” Mayor  Keisha Lance Bottoms  said in a news conference Saturday. “I do not believe this was a justified use of deadly force.” Nei
Post a Comment
Location: Atlanta, GA, USA
Read more
More posts