Showing posts with the label Elderly Disabled Man
Show All 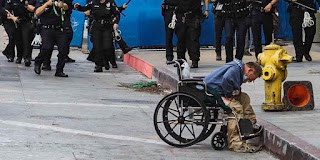 A common theme is starting to appear across all the stories of police violence against protesters in the past week. That theme is that the protests remain largely peaceful until police begin kettling protesters and attacking them with rubber bullets and tear gas. Multiple instances of  protests turning violent  all appear to have the same catalyst behind the violence — cops acting as the instigators. As the following case illustrates, even when the cops try to instigate a fight, up to and including shooting a homeless man in a wheelchair, people resist the urge to get violent. There has been a lot of looting and destruction in Los Angeles since the start of the protests last week. However, on Tuesday, protests remained entirely peaceful. This was in spite of the fact that cops opened fire on protesters with rubber bullets and doused them with tear gas. Dozens of peaceful protesters were documented trying to seek cover from the fire as cops shot them with “less than lethal
Post a Comment
Location: Los Angeles, CA, USA
Read more

This is Why There are Riots: Cop Caught on Video Attacking Elderly Disabled Man

- June 02, 2020
As most Americans watch the country burn from the comfort of their living rooms, many of them are wondering why people are out in the streets with so much anger in the first place. As Dr. Martin Luther King Jr. famously brought up before he was executed: A riot is the language of the unheard. People are tired of watching cops kill unarmed and often innocent people only to keep their jobs and pensions while the taxpayers of these cities take the brunt of the responsibility. Subscribe to more videos: https://www.youtube.com/c/PoliceBrutalityWorldwide
Post a Comment
Location: Salt Lake City, UT, USA
Read more
More posts