Showing posts with the label Atlanta police officer
Show All 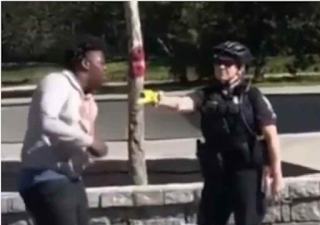 "He was just vaping," eyewitnesses said over the weekend as they watched in horror as an Atlanta police officer tasered a 17-year-old kid, knocking him to the ground and causing him to convulse. The event is currently being investigated internally. On Thursday, scores of adolescents were happily skating and hanging out at Atlanta's Historic Fourth Ward Skate Park when a female officer saw one of the youngsters using a vape pen. According to the police, vaping is forbidden in the park, despite the fact that it is outdoors, and hence the cop claimed the right to extort the adolescent. The short video shows the youngster, Terion Fortson, 17, rising up and speaking to the officer, demanding he "Get on the ground immediately." "Reach for the earth." Fortson was not shown in the video physically attacking the officer or demonstrating any other kind of resistance that would necessitate the subsequent use of force. According to witnesses, the taser was drawn w
Post a Comment
Location: Atlanta, GA, USA
Read more
More posts