Showing posts with the label 7/11
Show All 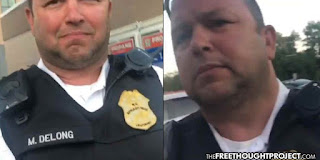 At the point when Salim saw almost twelve cops start to encompass a man outside a 7/11 on Sunday, she chose to rehearse her first alteration option to film the police. As the video demonstrates, Salim is far enough away not to be viewed as a danger and isn't talking or saying anything to the officials who have an unarmed man totally encompassed. Michael DeLong approached Salim and got in her face. The official, who is unmistakably bigger, wearing a slug confirmation vest, conveying a weapon, and encompassed by 10 of his individual cops, singled out this young lady in what must be called a demonstration of terrorizing and harassing.  Be that as it may, Salim would not be tormented. "We have cameras, too, " DeLong says as he approaches undermine and threaten Salim. "Would you be able to escape from me?" Salim says. The expression "move me" here is an unmistakable endeavor to incite Salim.  Rather than playing the domineering jerk's down,
Post a Comment
Location: Buffalo, NY, USA
Read more
More posts