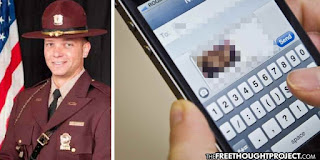 Albert Kuehne, 36, was charged with two counts of stalking with a bias for the incredibly creepy act. Kuehne detained the crash victim on suspicion of DWI and she was eventually transported to the hospital where she was treated and released. Her phone itself had no record of the messages being sent because Kuehne had deleted them. As FOX10 reports The woman called a lawyer, who reported the incident. The Minnesota Bureau of Criminal Apprehension began an investigation. According to the complaint, Kuehne's squad video showed him leading the woman to his squad car. Along the way, the woman took out her phone, and Kuehne demanded that she give it to him. The video showed Kuehne alone in his squad at that time while paramedics treated the woman. Investigators obtained a search warrant and seized Kuehne's phone. They found three photos of the woman on his phone, according to the complaint. According to the criminal complaint, the victim told investigators that she never gave
Post a Comment
Location: Minneapolis, MN, USA
Read more
More posts