A video of an utterly disgusting display of the American police state was published by attorney Ben Crump this week showing a tiny child being frisked, handcuffed, and hauled off to an adult prison for processing.
The video is from an incident that occurred at the boy's school in December 2018.
Crump just released the video late Sunday night while announcing a lawsuit against the Key West Police department.
Unbelievable!! Key West Police used "Scared Straight" tactics on an 8 yr old boy with special needs.
He's 3.5 ft tall and 64 lbs, but they thought it was appropriate to handcuff and transport him to an adult prison for processing.
This is NOT how you discipline a child with a mental disability!! We are working to get this little boy and his family the justice they deserve.
The fact that the tiny child was so small the handcuffs fell off of him speaks to the nature of this incident.
It is nothing short of child abuse and the officers involved need to be fired.
What's more, anyone involved in setting this up or condoning an 8-year-old boy being hauled off to an adult prison for misbehaving in school also needs to be fired and potentially charged with child abuse.
As the video shows, the little boy is sitting in the office when the two Key West police officers enter the room.
"So you know where you're going?" the officer identified as officer Kenneth Waite asks the boy.
"You're going to jail," the other officer chimes in.
"Stand up and put your hands behind your back," the cops say to the tiny child who should never hear those words from a police officer.
As the officer struggles to handcuff the child, and eventually gives up because his wrists are too small, the child asks where his daddy is. 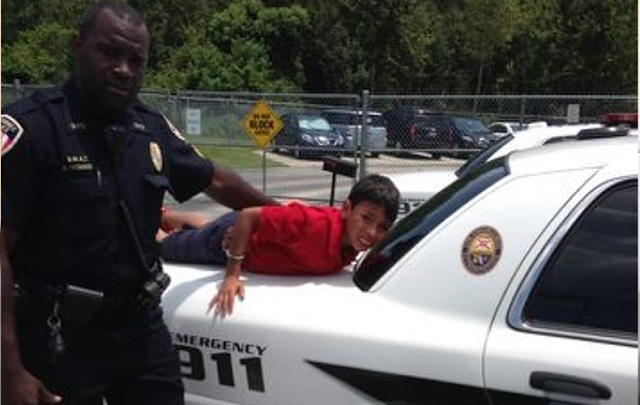 As the boy is walked out of the school, the cop then speaks to him using words like a child abuser would use - blaming the handcuffing and kidnapping on the child and not the ridiculous police state tactics they're employing.
"I hate that you put me in this position That you made me do this." the officer says to the clearly distraught little boy.
According to Crump, he was then brought to an adult prison and processed in - for allegedly misbehaving at school.
While the "Scared straight" tactics may be effective at curbing the criminal behavior of older teenagers, an 8-year-old boy lacks the cognitive ability to interpret this situation without anything but sheer horror.
Add the boy's mental disability to this situation and it becomes that much worse.
If anyone thinks this situation will be "Good" for the boy's behavior problem, they are severely mistaken.
Young children - even those with disabilities - often find themselves on the receiving end of police state violence while attending public school.
Colton Granito, an 8-year-old boy with autism, threw a tantrum during class.
Instead of following the boy's IEP plan, police were called.
The photo below is of a 10-year-old child handcuffed, laid out on the back of a police cruiser.
He misbehaved at school and was also arrested and treated like a criminal.
In September of 2014, we reported on body cam footage showing a 9-year-old special needs boy handcuffed as his father pleaded with the officer to release him.
That same month, a highly disturbing video of cops manhandling a 13-year-old autistic child as he screamed for help emerged on Facebook.
If you truly want a glimpse into the horrid effects of the police state on all school children, take a scroll through our archives, at this link.
at August 10, 2020 No comments: