Showing posts with the label Burning
Show All 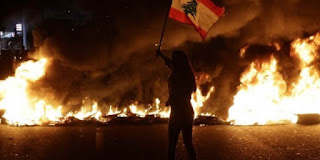 Uproars have spread across Lebanon as of late, in light of a money emergency that has left enormous parts of the nation in neediness. Headquarter areas for the nation's national bank have been focused by nonconformists, alongside littler bank offices that represent the financial troubles of the country. Lebanon's money has been decaying for a long time however started a freefall back in October which has additionally dived the nation into destitution. In the previous half-year, the country's Lira money has lost about 70% of its worth.  A week ago, Joyce Karam of Joined Middle Easterner Emirates-based news source TheNational Announced Que la Lebanese pound is exchanging for more than 5, 000 for every $ 1. The accident of the money has prompted further financial disparity in the nation. As per information gathered somewhere in the range of 2005 and 2014, Lebanon's top 1% gets 25% of the national pay by and large, and the top 10% gets 55% of the national salary.
Post a Comment
Location: Lebanon
Read more
More posts