Showing posts with the label Oregon Live
Show All

As Citizens Face Fines or Jail for Not Wearing Masks, Above the Law Cops Say ‘F**k’ It 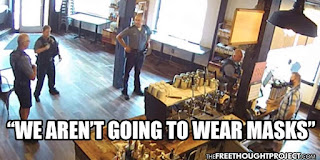 As COVID-19 cases ascend the country over, in excess of 20 states have forced compulsory veil laws, driving residents to wear covers in open, or, in all likelihood. On Wednesday, Oregon Gov. Kate Earthy colored passed on the danger of heavy fines and even prison time for residents who will not wear a cover in open. "We won't wear covers, " the trooper supposedly said, as per a composed proclamation from Manager gave to Oregon Live.  The incongruity of the troopers guaranteeing that the senator has "no position to take our common freedoms" can't be downplayed. This is originating from an individual whose division has tear-gassed, pepper splashed, beaten, and shot dissenters for rehearsing their unavoidably secured common freedoms lately during police ruthlessness fights in the state. In the wake of declining to wear a veil, the trooper submitted his request and afterward offered his input on the representative's order expecting covers to be worn
Post a Comment
Location: Oregon, USA
Read more
More posts