Showing posts with the label Protests
Show All

Body camera footage captured during recent demonstrations against police brutality has shown how cops often turn peaceful protests into riots by the way that they engage with the crowds. A demonstration in Cleveland, Ohio, on May 30th shows a police officer pepper spraying a peaceful protester before the situation escalated into a riot. In the video, an unidentified woman is seen standing on the sidewalk near a line of police officers, holding a sign that read, "Give us what belongs to us in peace, and if you don't give it to us in peace, we will take it by force," which is a quote by Emma Goldman, an anarchist revolutionary that lived during the early 20th. The women directly engaged with the police about their use of force on protesters and the general culture of violence among law enforcement. She asked the police, "Are you going to tear gas me? For standing here with my sign and trying to have a conversation with you?". As the woman was talking to the office
Post a Comment
Location: Cleveland, OH, USA
Read more

Cops Attack, Kidnap Man at Protest as He’s Being Interviewed by Local News 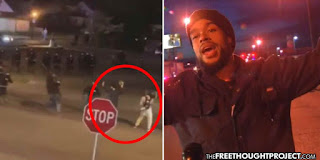 Police violence against peaceful protests is so rampant in the United States right now that much of it is being caught on mainstream media networks,  live and on air.  In one utterly ridiculous show of force, a protester, who is reportedly a pillar of the community, was assaulted by the police, tackled and kidnapped, as he was giving an  interview  to WIVB 4 News. You cannot make this stuff up. As the video below shows, the attack was captured from two angles. Miles Carter was giving an interview with a cameraman from WIVB when a swarm of riot cops started running toward the pair. His hands were in the air and he was doing nothing illegal. “My name is Miles Carter. I live in the Town of Tonawanda. I don’t live in the City of Buffalo,” he said. And as he continued with “My mosque is over on Genesee Street,” a dozen cops threw him to the ground so hard his helmet flew over ten feet. Then cops began setting off tear gas. Exactly why Carter was arrested remains a mystery as
Post a Comment
Location: Buffalo, NY, USA
Read more
More posts