Showing posts with the label Corey Marioneaux Jr
Show All 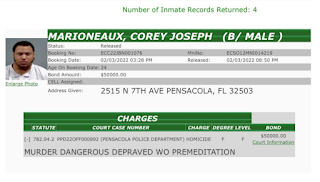 Corey Marioneaux Jr., 24, is a father of two and a devout churchgoer with no prior convictions. As a result, when he heard his front door smashed last week just before 5 a.m. while he slept in his bed, the last thing on his mind was, "it must be the cops; I'll just act completely defenceless with my wife and children in the house." Rather than that, he did what any father or husband would: he defended himself. Unfortunately for Marioneaux, it was the cops, and defending his family against them, that landed this innocent father in jail, where he now faces a lengthy sentence. Fortunately, no one was killed during the early morning raid in which police used a battering ram to break down Marioneaux's front door and storm into his living room. However, if this father of two had actually killed one of the intruders, he would have been justified. Though police claimed they "knocked" on his front door for ten seconds, the majority of people are still asleep at this
Post a Comment
Location: Pensacola, FL, USA
Read more
More posts