Showing posts with the label Pills
Show All 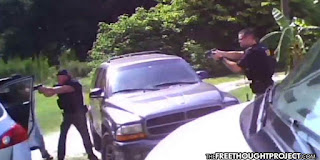 "When they said 'Show me your hands, ' the suspect should've shown us his hands, " Pasco Sheriff Chris Nocco told reporters at the time. Police say Brown had sold pills on a few occasions to an undercover sheriff's deputy prior to being killed by them. On the day in question, the sheriff's office planned to make a final drug purchase from Brown and then arrest him at work. As the undercover was pulling out the money to pay Brown, Sgt. It took only 11 seconds before cops opened fire on Brown. As the video shows, Brown is attempting to comply with the deputies by opening the door to get out and surrender. After the shooting, the Pasco Sheriff's Office refused to release the video from inside the vehicle, claiming it was confidential. When The Times Told the sheriff's office planned They are publishing the video, Lindsay Moore, the office's general counsel, Claimed the "video portions depicting the death of Mr. The sheriff's office
Post a Comment
Location: Pasco County, FL, USA
Read more
More posts