Showing posts with the label Gov Samuel Ortom
Show All 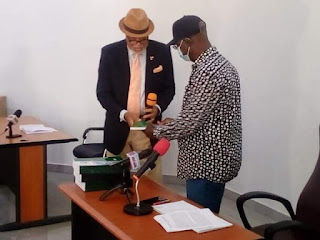 The Committee on Investigation of Brutality by Former Members of the Disbanded Special Anti-Robbery Squad, SARS, which was established by Benue State Executive Governor, Samuel Ortom, delivered its findings today at the People's House Makurdi. The panel was established in October 2020 in response to massive damage, theft of government and private property, and the loss of many lives during national "No to SARS" (nSARS) demonstrations. Gov Samuel Ortom, who was represented by his deputy, Engr Benson Abounu, reacted to the report by assuring the public that the recommendations would be implemented in their entirety to serve as a deterrent against future occurrences. He expressed gratitude for the committee members' efforts and wished them success in their future undertakings. Earlier in his speech, Justice Adah Onum, the panel's chairman and immediate past Chief Justice of the state, stated that the committee discovered the following brutalities committed by members
Post a Comment
Location: Benue, Nigeria
Read more
More posts