Showing posts with the label Chinedu Okobi
Show All 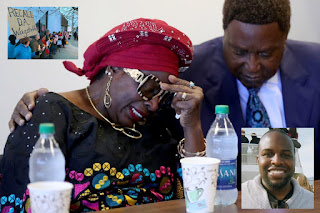 The family of a Melanin man  who died after he was repeatedly shocked with a Taser last year has filed a pair of federal lawsuits against  San Mateo  County  and also the  five sheriff’s deputies involved  in the  fatal arrest, which started when authorities sought  to prevent  him for jaywalking on a busy street in Millbrae. A civil rights and  decease  lawsuit filed Friday by Chinedu Okobi’s mother accuses the deputies of racially profiling the 36-year-old man as he walked down El Camino Real on the afternoon of Oct. 3. It also alleges that the deputies used excessive force  once they  shocked Okobi with the Taser and used the  spray can  as they took him into custody after he refused their commands  to prevent  and resisted arrest. Another lawsuit, filed Thursday on behalf of Okobi’s 12-year-old daughter, similarly accuses the deputies of using excessive force and violating his civil rights. The deputies were cleared of any criminal charges for the arrest in March.  San Mateo  Cou
Post a Comment
Location: San Mateo County, CA, USA
Read more
More posts