Showing posts with the label Damina Yusuf
Show All 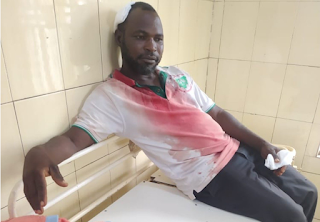 The Bauchi State Council of the Nigeria Union of Journalists (NUJ) ordered its members on Friday to immediately cease covering the state police command's operations. The order was included in a press statement signed by Comrade Umar Sa'idu, chairman of the council, and Isah Garba Gadau, secretary of the council, on police violence against journalists in the state, which was made accessible to DAILY POST. The Union strongly denounced the bad conduct of Rapid Response Squad (RRS) operatives in the State who sexually assaulted and wounded one of its members, Damina Yusuf of the AIT, on Thursday 30th July 2021, while covering a demonstration by students of Bauchi College of Agriculture in Yelwa, Bauchi. Later that day, the sufferer was admitted to Bauchi's Abubakar Tafawa Balewa University Teaching Hospital (ATBUTH). According to the statement, the suspension of coverage of police operations would continue until the perpetrators of the heinous crime were apprehended and punishe
Post a Comment
Location: Bauchi, Nigeria
Read more
More posts