Showing posts with the label Eastern Security Network
Show All

Nigeria has been accused of conducting a 'ruthless' campaign in the restive southeast. 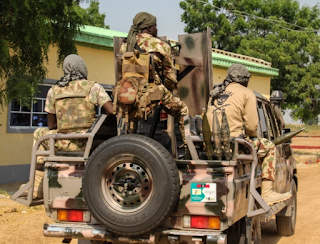 Amnesty International has accused Nigerian security forces of using excessive force and murdering at least 115 people earlier this year during a "repressive campaign" against separatist agitators in the restive southeast of the country.  This year, violence has erupted in the southeastern states, with at least 127 police officers or members of the security services being killed, according to the police. According to local media reports, about 20 police stations and electoral commission offices have been assaulted. IPOB, a banned organization seeking independence for the region's ethnic Igbo, and its armed branch Eastern Security Network (ESN) has been accused of the violence, although IPOB has rejected the accusations. According to Amnesty, security forces, including the military, police, and the Department of State Services (DSS) intelligence agency, have murdered scores of gunmen and civilians in the areas where assaults occurred. “Amnesty International's findings p
Post a Comment
Location: Nigeria
Read more
More posts