Showing posts with the label Studio
Show All 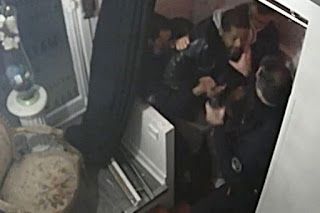 France's police watchdog, IGPN, said on Thursday it absolutely was investigating allegations a musical genre producer was physically attacked and racially abused during a police check. The incident was captured on CCTV, which was obtained by the Loopsider press agency. The alleged victim, identified only as Michel, told reporters he was jumped on by police at his music studio on the 17th arrondissement of Paris on 21 November. He said he had been walking around nearby without a mask, against French Covid health protocols, and upon seeing a prowl car, went into his music studio to avoid a fine. However, the officers followed him inside the studio and commenced to physically attack and racially abuse him, he alleged. The Paris force previously faced criticism after clashes erupted when officers cleared a migrant rights protest in situ de la République Link to source: https://www.youtube.com/watch?v=kJkAfVLAcx4
Post a Comment
Location: Paris, France
Read more
More posts